Simmons opened with references to a separate DoE announcement made less than two hours earlier by Secretary of Energy Rick Perry, who used his video greeting for the WEFTEC 2019 Opening General Session to reveal the selection of the National Alliance for Water Innovation to lead a DoE Energy-Water Desalination Hub to address water security issues in the U.S.

Identifying specific audience members who played critical roles on the DoE team effort behind that award, Simmons said, “It is great when we are able to get a project like that announced, where we have the selection made.”

He elaborated on some of the specifics behind the Energy-Water Desalination Hub program, as well as the Water Security Grant Challenge, an umbrella effort led by DoE.

“The Water Security Grant Challenge is a White House-initiated, DoE-led activity to improve water quality,” he said, adding that the challenge has five goals overall:

“Over the past 10 months, DoE has initiated a number of prizes, technical assistance opportunities and R&D [research and development] funding to achieve these five goals, as well as to work with other agencies,” he said.

“One input into this was just announced a couple of weeks ago in San Diego, where EPA rolled out their draft water action plan,” he added. “And that has input into this effort as well, because one of the realities of the federal government and water in particular is that it cuts across the activities of a large number of government agencies. So we try our best to work together, since the Water Security Grant Challenge is not just a DoE only initiative, we try, and the White House has instructed us to be working across federal agencies on those activities.”

Shifting to the latest announcements, Simmons pointed to the release of two new prize efforts.

“The first announcement is a Wastewater Resource Recovery Prize,” he began. “This prize is in the design phase at the Department of Energy, where we are seeking feedback from the public and private sector stakeholders on the design of a prize competition to increase resource recovery from municipal wastewater treatment plants across the United States, with particular emphasis on small and medium sized wastewater treatment plants. Obviously we have seen what we can do in some of these very large treatment plants, very large resource recovery facilities if you will. How do we translate that technology in many cases to small and medium sized [plants].”

In addition to seeking novel systems-based solutions for multi-disciplinary teams to implement resource recovery, the effort seeks to reduce energy consumption at those same facilities.

“This originates with our Solar Energy Technology Office,” he explained, adding, “Electricity costs presently account for over half of the expenses at state-of-the-art reverse osmosis desalination plants.”

Noting the overall goal of using solar power to drive down those energy costs, he said that the new Solar Desalination Prize is a $5 million competition to accelerate technology innovation through the design, development, and demonstration of desalination systems that use the sun to generate fresh water from salt water. The prize provides innovators with a pathway from initial concept to technical design to prototype field testing systems that provide clean accessible drinking water using only the sun as a power source.” 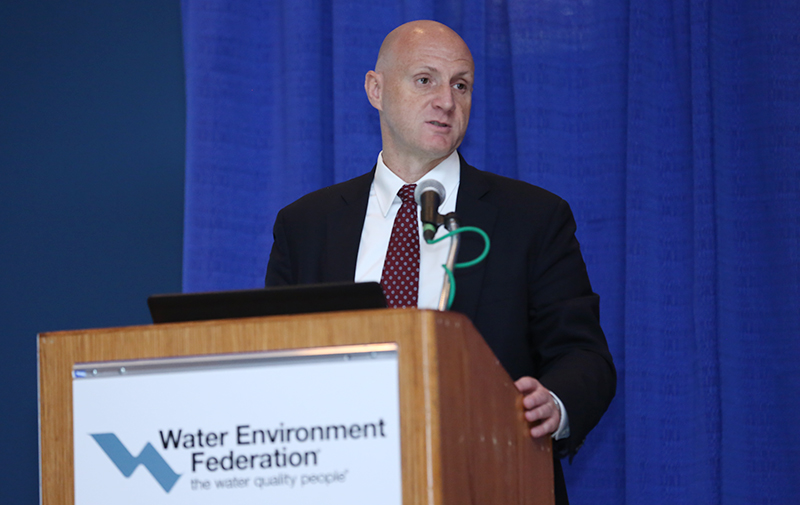