The 2019 WEFTEC Opening General Session highlighted its theme of ReGeneration Workforce with a discussion of what some might call "circles within circles."

Following a warm welcome by Kari Steele, President of the Metropolitan Water Reclamation District of Greater Chicago, WEF President Tom Kunetz prefaced the program by recognizing the impressive organizational service of Dr. Eileen O’Neill who retired as WEF Executive Director after more than 28 years at WEF.

Pointing to myriad highlights from her time at WEF, O’Neill noted that she had been able to rise “in what had been a male-dominated profession.

“I’m confident that my story is just one example of how the water sector can be supportive and nurturing of each individual as they are and where they are,” she added. “And I know that there are many more stories to be told, and more to be created. We just need to give them a voice and to keep providing those opportunities.”

She continued, “This is really important. As Tom will talk about, WEF has concluded that we need more diversity and inclusion in the water workforce.

“You may notice a lot of circles in today’s program and at this conference,” she said. “And there’s a very good reason for that. But for me personally, they are representing how my time at WEF has come full circle. And as I take all of my experiences and relationships into the next chapter of my life, I do so with a renewed sense of purpose and commitment to nurture others and support others, just as I have been by WEF, the water profession and all of you.”

Elaborating on many of those thoughts, Kunetz pointed to the circle underlying the WEFTEC 2019 conference theme that builds on the success surrounding the WEFTEC 2018 theme of ReGeneration.

“Instead of adopting a totally new theme for 2019, we chose to build on this simple yet elegant concept that defines WEF and WEFTEC. In some small way it’s our statement about the need to move away from a disposable society and to become more cyclical,” he said.

“These are some of the circles that Eileen was talking about,” he added. “Rather than using it once and moving on, we decided to showcase how recycling, renewing and repurposing can be applied to any number of things.”

After Kunetz reminded the audience that ReGeneration reflects “a global movement made up from people of many nationalities and diverse backgrounds who are passionate about sustaining the diverse natural environment,” current WEF Executive Director Walt Marlowe pointed to the evolution of the 2019 ReGeneration Workforce theme and a number of exciting organization projects that will further support that theme over the coming year, including the planned November release of a documentary film titled, Brave Blue World.

One exciting announcement was made in a video greeting to WEFTEC by U.S. Energy Secretary Rick Perry, who revealed the selection of the National Alliance for Water Innovation, many of whose members were in the audience, to lead a U.S. Department of Energy Energy-Water Desalination Hub that will address water security issues in the U.S. With a proposed federal investment of $100 million, the Hub will focus on early-stage research and development for energy-efficient and cost-competitive desalination technologies, including manufacturing challenges. 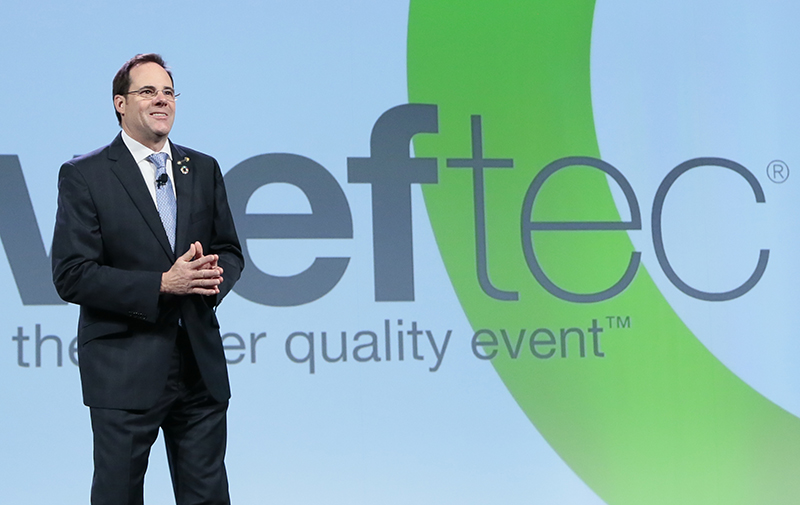 Returning to the circular theme, Kunetz echoed earlier comments about the water workforce.

“In addition to the right education, the water workforce of today should be a reflection of the community it serves,” he said. “But right now it is not. According to a recent study by the Brookings Institution, the current water sector workforce is two thirds male and 85% white. How can we fully understand the needs of all our customers if our workforce does not mirror the people we serve?”

The Power of Language

Emphasizing a need to “change the culture” underlying the workforce imbalance, he noted that one key method to achieve cultural change was based on the correct use of language. His comment set the stage for a keynote presentation Dr. Lera Boroditsky, Associate Professor of Cognitive Science at the University of California San Diego and Editor-in-Chief of Frontiers in Cultural Psychology. After highlighting myriad examples of how language can be open to both interpretation and misinterpretation, she presented the audience with “three tools to improve communications.”

The Opening General Session wound down with an exceptional musical performance by Chicago-based “Musicality,” which served to energize the audience members.

Following the award of a gift certificate package to an audience member under WEFTEC’s new “Surprise and Delight Experience” program, Kunetz seized of that audience energy, challenging attendees to “Go out there and shake up the world.”