WEFTEC 2021 will host the ninth annual Operator Ingenuity Contest awards ceremony on Wednesday, October 20. The previous 8 years of this competition have led to 47 award-winning ideas. In 2021, five more entries will be added to the ranks of those who found simple, applicable solutions to make their job easier and safer. 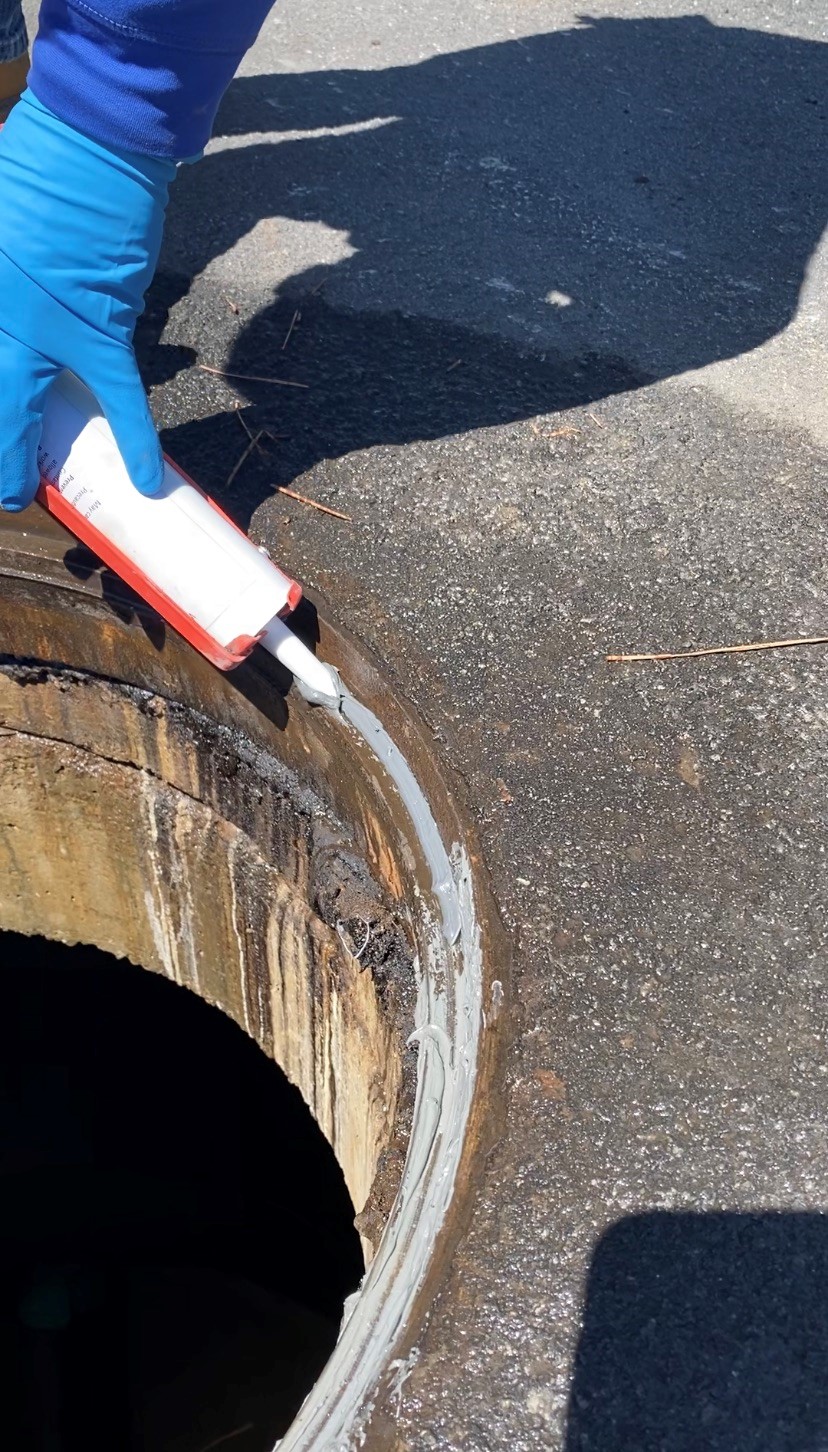 A group of seven ingenious inventers from the Truckee (California) Sanitary District — Matt Ruge, Ryan Clifton, Rene Lopez, Mike Donchez, Eric Sundale, Ray Brown, and Blake Tresa — found a simple way to stop infiltration and inflow (I/I) from maintenance access sites during rain events. Through field testing, they determined that significant I/I was coming from the annular space between the cast iron frames and covers. To prevent this, they applied a bead of a readily available, non-toxic, petroleum-based pipe thread compound in the frame. When the cover is installed, the annular space between the frame and cover becomes completely watertight. This simple fix also delivered a few extra bonuses:

They believe the lubricating characteristic of this product could reduce collection system worker low-back and shoulder injuries as well as help prevent hearing loss to workers that strike stuck manhole covers with a mallet to open them.

The Mixing It Up Award 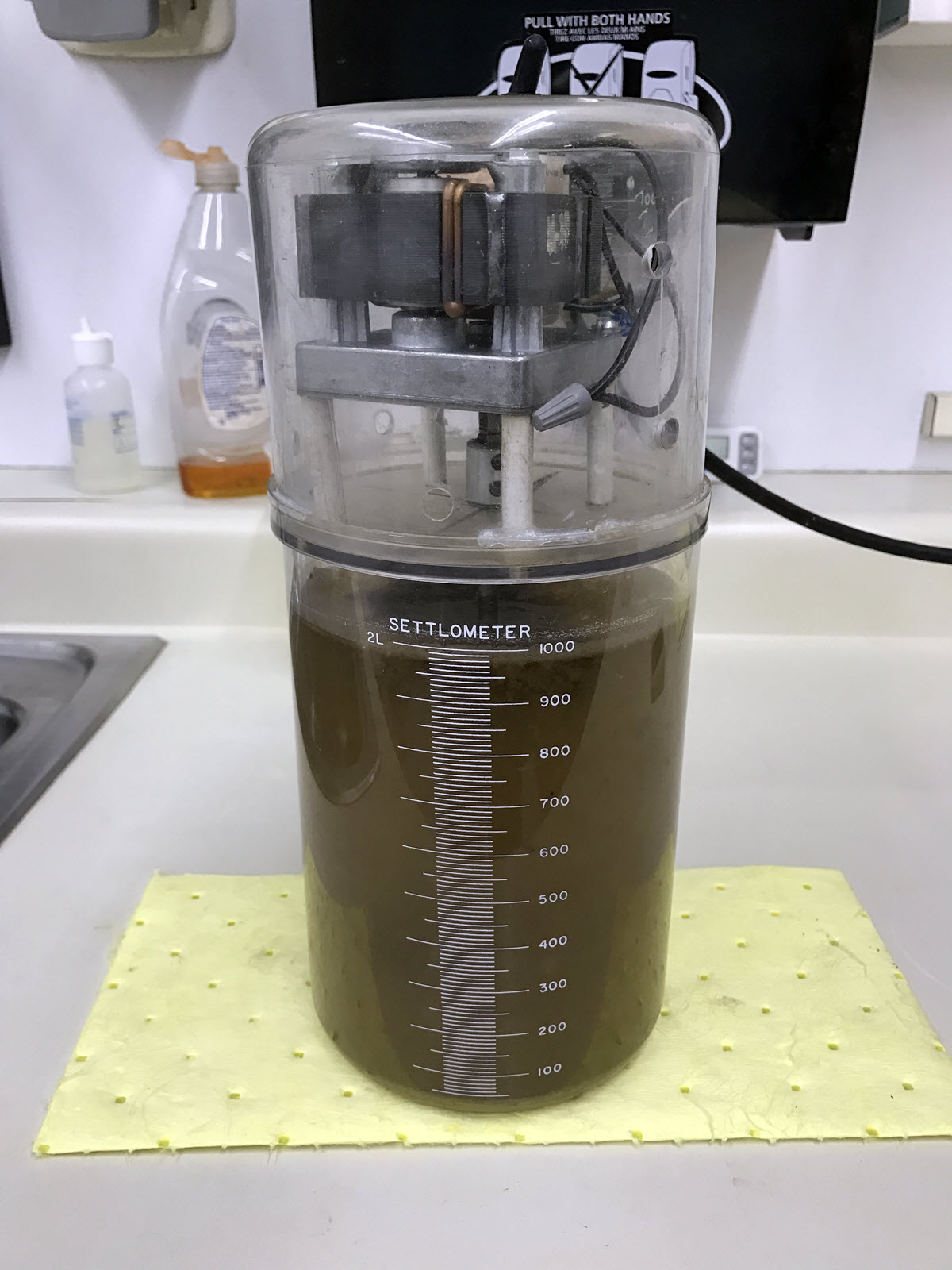 Mickey Groves at the Cripple Creek Wastewater Treatment Plant in Colorado invented a single jar stirrer type device for running flocculated settleometer tests. The City of Cripple Creek uses this device to perform its testing for daily process control. Flocculated suspended solids (FSS) is a better indicator of sludge quality than non-flocculated settleometer tests. The device was built from two settleometers, a motor, and a paddle from a no longer functioning jar tester. The upper compartment is sealed to make it water resistant and houses the motor. The top piece fits over a standard Mallory settleometer. The lower compartment includes two baffles to create turbulence like using a square jar testing container to ensure adequate mixing. This tool can be extremely helpful for troubleshooting and can be used as a single-jar tester for verifying chemical dosage rates.

The Dosing in the Dark Award 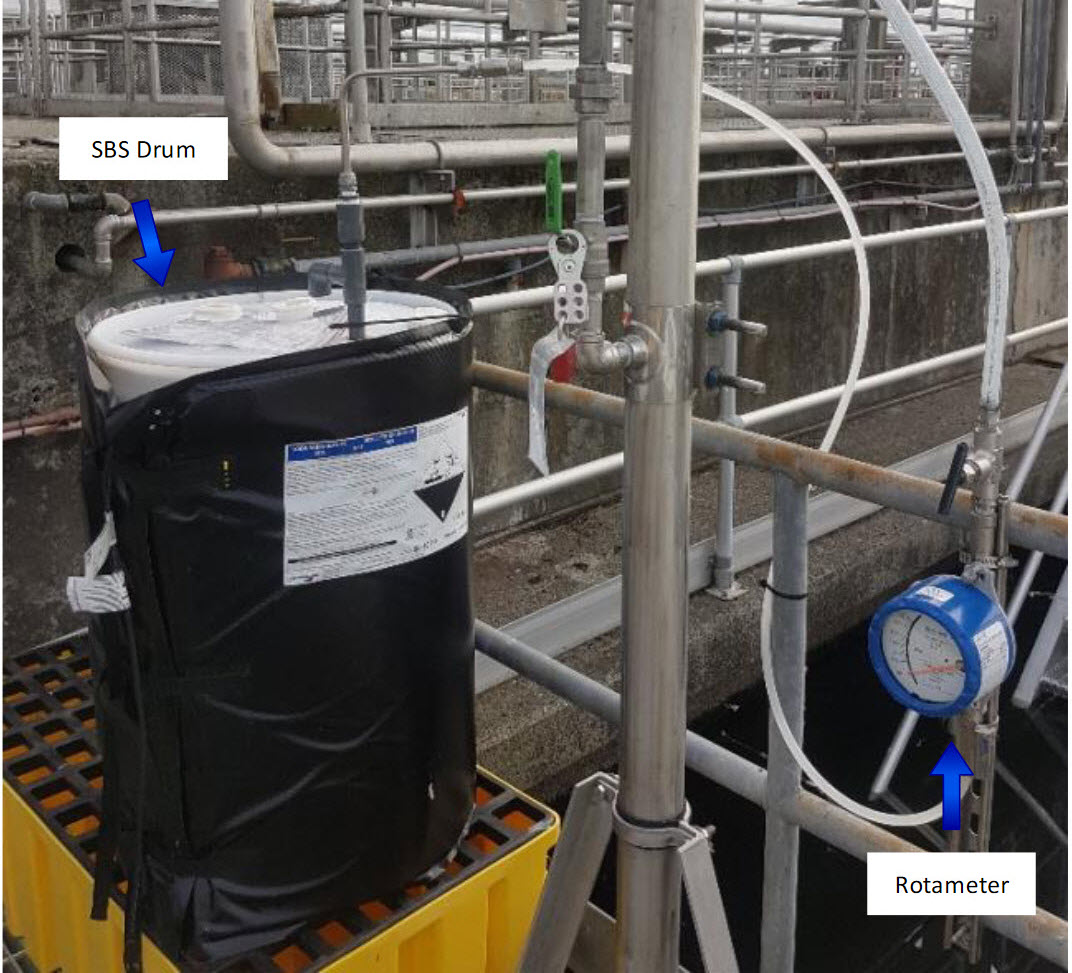 Mike Hughes and Lani Somasunderam from the Lulu Island Wastewater Treatment Plant in Richmond, British Columbia, Canada, built a simple pilot back-up dosing system to ensure continuous dosing of sodium bisufite solution (SBS) during power interruptions or in the event of a fault to the primary SBS dosing system. This pilot system uses municipal water pressure with an eductor to draw 38% SBS from a drum. The solenoid valve on the water line de-energizes to allow water to flow into the eductor. The SBS is then injected into the primary dosing discharge piping and flows into to the existing diffuser. No electrical power source is required to operate this system. Operators can prove flow with the use of the rotameter and visual level in the drum. 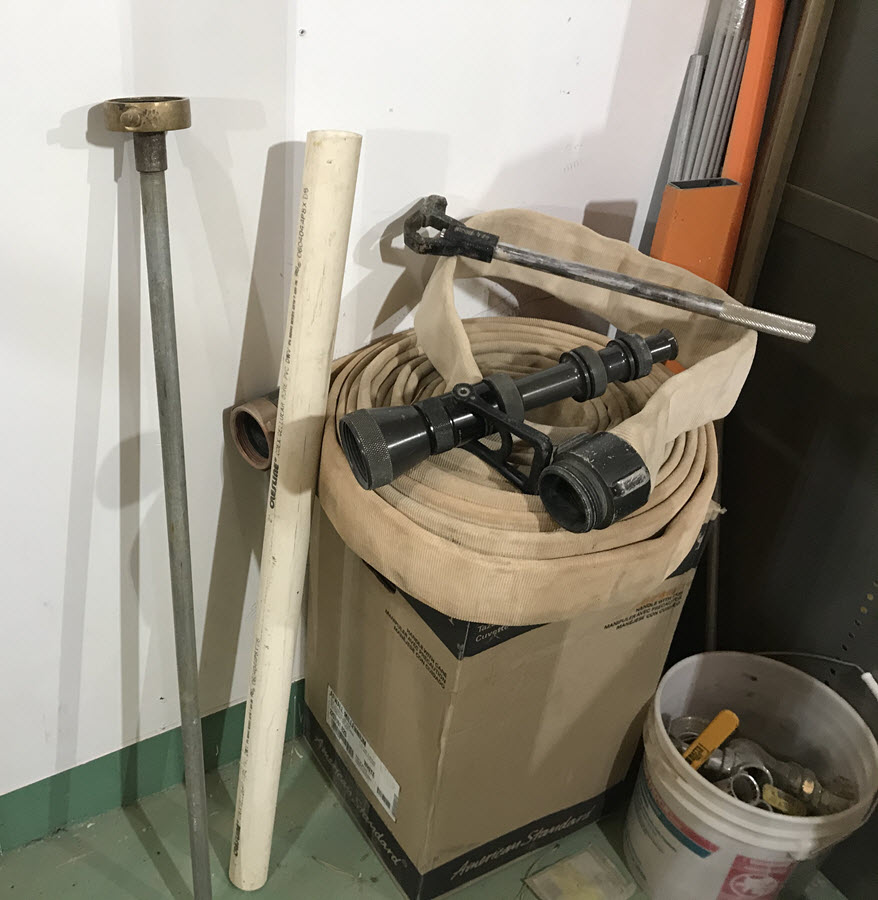 Moyle Johnson from Bryce Canyon National Park in Utah assembled a solution for quickly and easily clearing silt from valve boxes. Preventive maintenance on these valves had been left undone for several years. When Johnson began reinstating the maintenance, he discovered that most of the valve boxes had become buried in silt. Instead of spending up to several hours to clear a deep valve, he utilized the hydrant water pressure to clear the valve box of silt and debris. He combined a 1.75-in. smooth bore nozzle and valve with a 1-in. tip, a length of 1.75-in. fire hose, and a length of PVC pipe measuring the depth of the buried valve. The hose attaches to the fire hydrant and gets charged with the valve closed. Point the modified nozzle into the valve box, open it, and the water pressure quickly breaks up the silt, dirt, rocks, and debris as it washes it up and out of the valve box. This method eliminates the need for heavy equipment to dig up the valve boxes as well as reduces the opportunity for injury from manual labor as working below grade in trenches and holes. 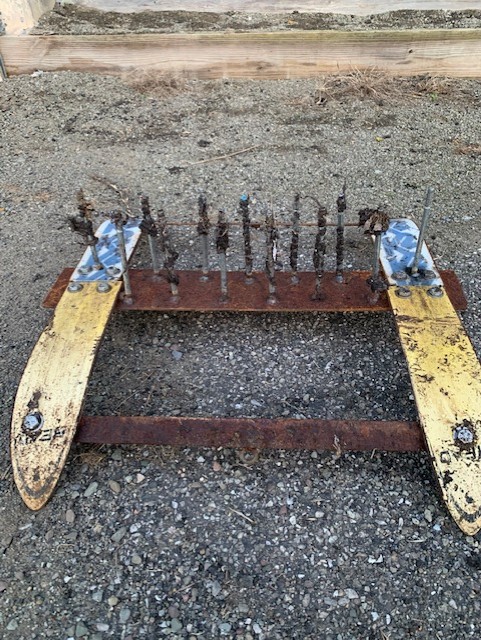 Chief Operator James Irwin and retired Chief Operator Paul Fisher at the Village of Sherman (New York) Wastewater Treatment Plant invented a ski-mounted rake. This device “skis” over the solids in the facility's drying beds leaving furrows as its pulled through. Thus, increasing surface area and shortening drying time. Fisher created the original device that was pulled only one way, so operators had to walk along the edge of the bed walls to get to the back of the bed. This created the risk of falling in the solids. The current model, updated by Irwin, is dual-directional and pulled by a rope on each end and eliminates this risk. The operators found the skis themselves during the annual Village of Sherman spring clean-up; and the bolts came from the facility’s normal inventory.

On Wednesday, October 20 at 10 a.m., we will present the awards in person to those winners able to join at WEFTEC 2021. Come to the Global Center, Grand Concourse Lobby, North Building, to see the winners and hear from them about their winning inventions. 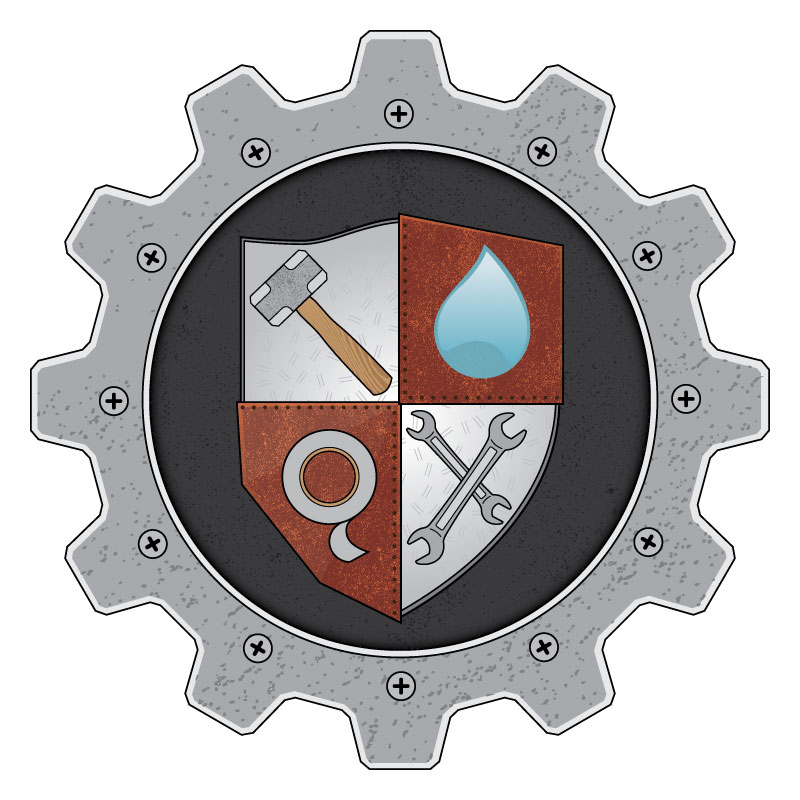